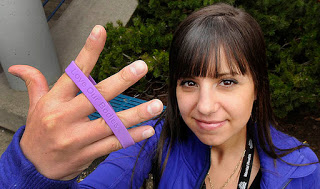 Amy Candido endured her own battle with eating disorders and now speaks to young people around Metro Vancouver to raise awareness about body image and self-esteem.

Article by Mario Bartel, Burnaby Newsleader
http://www.burnabynewsleader.com/lifestyles/189063611.html?c=y&curSection=/&curTitle=BC+Lifestyles&bc09=true
As Amy Candido shopped for a dress for her wedding last June, her friends urged her to lose weight to ensure it would fit on the big day, to look her slimmest best as she walked down the aisle.
She ignored them.
“That dress is for me, no matter how I am,” she thought.
That’s a long way from 10 years ago, when Candido had to get her prom dress taken in a few times as she continued to lose weight.
Candido had an eating disorder.
Through her high school years, and then as a kinesiology student at UBC, Candido says her weight defined her, even guided her choice of studies.
“I felt I needed an identity,” says the Burnaby resident. “I didn’t play sports, I wasn’t good in choir. I was obsessed with the body.”
She counted every calorie she ate. She exercised to exhaustion, including middle-of-the-night jogs through Central Park. Twice she was stopped by police who urged her to at least run with a friend, or a dog.
“I just didn’t care. I was just existing, I wasn’t living.”
She isolated herself from friends and family, and avoided social situations that might involve food. She immersed herself in her studies to the exclusion of everything else.
“If I didn’t get an A, I might as well fail,” says Candido. “Everything was black and white.”
When Candido looked in the mirror, she didn’t see her hair falling out in clumps, her gaunt cheeks and sunken eyes.
“As long as I was thin, everything was okay,” she says. “I would strut down the sidewalk thinking everyone was jealous of me.”
Getting kicked out of the Master’s program in physiotherapy jolted her back to reality. After all, her advisor told her, it would hardly set a good example for someone so unhealthy to be working in the health services.
“I rode the bus home crying. I needed help.”
Her mother got Candido admitted to the eating disorders in-patient program at St. Paul’s Hospital. She started therapy.
Candido’s journey back to health wasn’t easy.
“The eating disorder voice in your head is telling you this is not good,” she says. “I was confused.”
Candido was challenged to come up with other interests to take her mind off food. She volunteered as a dog walker at the Burnaby SPCA. She started eating more, and cut back on her exercise regime.
When she was discharged from St. Paul’s she moved to Kamloops to get away from the tension that was a constant companion to her eating disorder, to get a fresh start.
As she studied respiratory therapy at Thompson Rivers University, she lived on her own, she made new friends, she ate pasta and cookies.
“It was a test,” she says.
And it was one she passed, eventually leading her to work with Jessie’s Legacy eating disorders prevention program, and as an eating disorders peer support worker at BC Children’s Hospital.
In the past year, Candido has spoken about eating disorders, body image and self-esteem to students at more than 30 elementary and high schools around Metro Vancouver. It can be a struggle to reach kids who are constantly bombarded with images of young, perfect, slim bodies, who feel pressure to keep up with their peers.
Instead of preaching, she says, she gives them tips on developing coping skills, encourages them to focus on doing things they enjoy, that they’re good at instead of what’s looking back at them from the mirror.
“Life is way too short to care about that,” says Candido. “It’s just a waste.”
Feb. 3-9 is National Eating Disorder Awareness Week. It’s also the start of the provincial eating disorders awareness campaign which will include educational events for the public, the creation of a video and flashmob contests. For more information go to www.familyservices.bc.ca