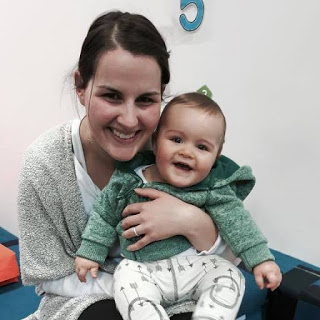 Just after midnight on August 2nd, 2014,  I welcomed my son Trystan into the world. It
is hard to believe now that it was almost 11 months ago as I can still picture
the hours leading up to one of the most exciting days of my life. Becoming a
mother has been the greatest joy but my journey to motherhood was not without its
challenges, especially when it came to my ever-changing body.
I was in recovery from my eating disorder for over eight years
when I became pregnant and over the months that followed, I was surprised at
how much I struggled with my changing body. Most days, I felt empowered and
emboldened by my body’s ability to grow a baby all the while
I carried on doing everything I had done before. However there were many days,
where I’d put on jeans that fit the day before only to find them
stuck at my hips. I felt the negative self-talk sneak back in, as well as the
nerves of feeling at odds with my body. Even acknowledging that I was growing a
HUMAN inside of me didn’t ease the stress at times and I found
some days really hard.
I was able to manage these triggers by talking to other pregnant
friends about what I was experiencing. For my friends who had never had any
disordered eating, they could relate in that they also struggled with their
changing bodies. Hearing this made me appreciate that I was not alone. My past
may have made me more susceptible to these negative feelings but my struggle
was also wrapped up in being a young woman growing up in a thin-obsessed
culture.  Realizing that, I was able to
refocus my attention back to the bigger picture (the growing of a human)! Doing
some research on how my body was shifting and making room for this little being
was fascinating and inspiring and made me feel like my body was this
fantastical vessel. I began giving my body (and in that, myself) more
compassion and room to do what it needed to do to raise my child in a safe and
healthy way.
When I stopped trying to fight my morphing body, I began to feel
so much better about the process I was going through. I found I had more energy
to go to the gym and slept better because of it. I’ll spare you the
gory (and glorious!) details but the act of giving birth made me completely in
awe of myself and my body’s ability to be resilient and strong
when I needed it the most.
My son will be one next month and I hope to instill in him a
happy and positive sense of self as he grows up. I want him to be well versed
in the social constructs of body image and the unrealistic expectations put on
women but also men. I believe it is never too young to start this type of
education as I remember feeling ‘big’
as young as ten years old.
But for now, I will love every chubby roll on his body and on
mine too!
Blog written by: Sioned Dyer
I get excited about creating vibrant and inclusive communities. I
have worked in the non-profit sector for over ten years in various social
planning and community engagement roles. Concurrently to my professional work,
I am in graduate school at Simon Fraser University in the Urban Studies
program. I love being outside and you can find me on any given day, hiking with
my son and dog on one of the many North Shore trails. A coach with Special
Olympics for over eight years, I believe that when all folks have an
opportunity to thrive, our communities will flourish!