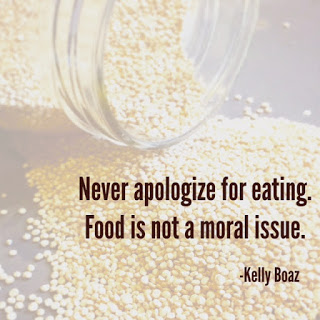 What kinds of things do you apologize for? Chances are you say you’re sorry when you step on someone’s foot, when you arrive late for a meeting, when you inadvertently hurt someone, or if you interrupt someone when they are speaking. Those are all great reasons to apologize.

You know what’s not a good reason to apologize? Apologizing for eating food.  “What are you talking about, Kelly? I don’t sit around saying I’m sorry with every mouthful!”

Okay, so maybe you don’t LITERALLY apologize for eating food, but there are lots of subtle ways to do it:

That last one was a favourite of mine early in my recovery from anorexia. I had to make sure that everyone knew that I knew that it was a “bad” food. That if I had my way, I wouldn’t be eating it. That I felt guilty, but I wasn’t the one to blame. Yes, I was eating the foods I was supposed to and returning to a healthy weight, but I was stuck in the mindset of an eating disorder: the idea that food must be earned or paid for or forced upon me.

Guilt and shame show up a lot when we feel like we have to earn our food choices. We shame ourselves by labeling the food as “bad”, and promise to make up for it. We let everyone know we’d feel guilty about this if we hadn’t earned it in advance. And often, by food-shaming ourselves, we’re subtly shaming those around us: those who are choosing to partake in the food in question who haven’t “made up for it”.

As long as we keep making these apologies, we’ll keep telling ourselves (and others) that food is something to feel guilty about. As long as we hold this belief, we’ll never be able to fully heal.

Now, I’m not saying that full healing is perfect. I’m fully recovered from my eating disorder, and sometimes the “should” monster still creeps into my consciousness. It’s hard to live in this world and NOT think, “Oh, I really shouldn’t be eating this” from time to time. When it happens now, though, I make different choices: I eat it anyway. Doing this is scary, at first. The brain is made up of pathways: pathways that are formed every time we make a new choice. In the eating-disordered years, the “don’t eat the scary food” path was a well-paved highway, while the “eat the scary food” path was an overgrown foot trail through the woods. It takes time and work to make that foot trail feel as comfortable as the highway.

I don’t make up for it. I don’t work out any harder afterwards, and I don’t let the fact that I’ve eaten a “scary food” change the way I show up to the rest of my meals. Again, this is uncomfortable at first, but training your brain takes time. Keep at it.

“This looks delicious” Instead of using one of the aforementioned apologies, I remind myself that I’m allowed to eat food just because it’s delicious and I like it.

I do it again. By engaging with scary foods on a regular basis, I’m more likely to engage with them in a healthy way – no restricting myself when I really want more, and no bingeing because I don’t know when I’ll allow myself to eat that food again.

It’s tempting to want to wait to heal until society changes, and food-shaming is a thing of the past, but global healing takes time, too. If we all stop apologizing for eating, though, we can encourage others to do the same. In making these changes, you may discover other areas of your life that require healing. That’s okay. Recovering is never easy and rarely fun, but recoverED is one of the best things you’ll ever experience. It’s possible, and you’re worth it.

After winning her 17-year battle with anorexia, Kelly Boaz turned her life’s focus to helping others do the same. Kelly is a Holistic Nutritionist, specializing in eating disorder recovery and helping people heal their challenged relationships with food and the body. She is also a writer and a speaker (TEDx, TDSB) and hopes to inspire others to make peace with food, and find freedom in their own lives.