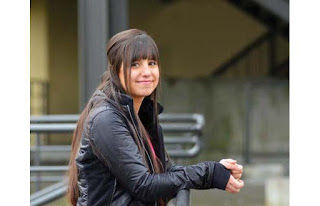 It started in junior high, when she decided to become a vegetarian. Nothing to send up any red flags, since many people cut meat from their diet out of a concern for animal welfare; but for Amy Candido, it was the first step on a slippery slope to an eating disorder that would completely take over her life.

“I didn’t know why I chose that,” she said of her decision to restrict her diet. “But now, looking back, I know that was just a way for me to control an aspect of my life, because subconsciously, everything was going out of control.”

Candido lost weight slowly at first, becoming ever more picky about her food, but by her last year of high school, she had to go back to her seamstress several times to get her prom dress taken in as she became more and more frail.

Her mother had her admitted to B.C. Children’s Hospital, but she did not respond to treatment. Her hair stopped growing and became dry and brittle, she stopped getting her monthly period, and still she refused to eat.

Despite these signs, she would not admit to herself the diagnosis was correct: she was suffering from anorexia nervosa.

Starting classes that fall at the University of British Columbia, Candido enrolled in kinesiology and biomechanics courses, even further channeling her obsession with the human body.

She became focused solely on diet and exercise, watching the food network when she took breaks from studying, and sneaking out her bedroom window at night to run through the trails in Central Park.

“I had no friends,” she said. “I got rid of them all because I just wanted to be by myself and just be in my own little shell. I would spend my afternoons just studying because I needed to get an A. If I didn’t get an A, I might as well fail.”

This type of black or white thinking – so common among perfectionists – is what also made Candido feel that if she wasn’t thin, she might as well be obese, she said, noting she had also become darkly depressed.

“My mood was just stale,” she said. “I wasn’t happy, I wasn’t sad; I was just numb. . I remember praying to God, ‘Just please don’t wake me up,’ because I hated living.”

By this time, she recognized she had a serious problem but was not ready to take steps towards recovery.

And it got worse. Candido became bulimic, binging at the Metrotown mall food court on her way home from university, only to head straight to the public restroom to purge the doughnuts and milkshakes she’d consumed and then go back for more and do it again. She stopped looking after her appearance, wearing her brother’s clothes to hide her body, and no longer wearing any makeup.

She kept running despite the excruciating pain in her legs, which she later discovered was caused by severed nerves due to a lack of fat cushioning her feet.

“That scared me, but I was too deep in the eating disorder to do anything about it,” she said.
It should have been a wake-up call, she says, but at the time, her mental illness was so severe she just thought of it as another sign that she deserved to be physically punished. She went into debt buying diet pills and bought a treadmill to put in her parents’ basement after her gym membership was revoked when the manager told her she was setting a bad example for other members.

The turning point eventually came when she was pulled aside by an instructor at UBC who told her she would no longer be allowed to continue the physiotherapy graduate program she had been accepted into because if she couldn’t help herself, she couldn’t help anyone else.

On the bus home, she realized she didn’t want to continue down this path of self-destruction. Candido walked past a restaurant and stopped to watch a group of women about her age eating at an outdoor patio. Seeing them enjoying each other’s company, she realized what she was missing out on in her life.

“I was just in awe of them,” she said. “And they were all different sizes and they were just laughing and having fun with friends, and I wanted that so badly.”

Despite her mother’s many attempts to get help for her over the years, Candido said it wasn’t until that point in her life that she decided the help was worth accepting.

“I remember all the doctors telling my mom that I had to get worse before I could get better. I had to hit rock bottom and just get that slap in the face.”

At St. Paul’s Hospital in-patient treatment centre in Vancouver, she spent her days getting her digestive system working again and did yoga to gain strength.

When she got out of the hospital, her mother left little notes around the house, in her coat pockets and under her pillow that said, “You are beautiful, Amy, I’m so proud of you. Keep going.”

Candido began to nurture the seed of hope in her heart just as she nurtured her body – slowly, but with a sense of purpose. After a relapse and then a successful year of out-patient treatment, Candido was finally looking like herself again, and she was accepted to the respiratory therapy program at Thompson Rivers University in Kamloops. She made a fresh start with a new career plan, her own apartment and new friends who didn’t know anything of her past.

“They would be like, ‘Amy, we’re going to lunch; why don’t you come?’ and there was no tension in their voice, there was no, ‘Is she going to eat a salad, is she going to challenge herself? Are we going to trigger her?’ It was just so nice and easy, and I chose to put food in my fridge, because I was living on my own, and I chose not to go crazy exercising – I had the choice,” she said. “No one was there to police me. And it was very liberating. I just kept saying, ‘I want to live. I want friends, I want to contribute to the economy.'”

When she finished the program in 2009, Candido found there were few jobs available in the Lower Mainland in her field, so she started volunteering as a peer support worker for youth with eating disorders at the Kelty Mental Health Resource Centre at B.C. Children’s Hospital.

She was an instant fit, being able to relate with both empathy and realism to her clients. After a year, she was offered a full-time job and today she counsels youth and gives presentations at schools around the Lower Mainland.

At Family Services of the North Shore, which runs Jessie’s Legacy Eating Disorder Prevention Program, program director Mimi Hudson says Amy’s story is both inspiring and helpful for those struggling with anorexia or bulimia.

“I think it’s really helpful to see that you can get better; that there is hope if you do have an eating disorder,” she said.

There is no single known cause or cure for an eating disorder, but there are some signs to watch out for, as some people are more predisposed than others, said Candido. Being an adolescent, being female, with a perfectionist type personality, and having addiction in one’s family can indicate vulnerability.

“If you think there’s an issue, there’s an eating disorder there, then there is,” she said. “Don’t second-guess yourself. Take her to the doctor, get her assessed right away, because the sooner we can figure this out, the sooner she’s out of it. Because the longer you’re in it, it’s hell. It’s a prison.”

For more information on how to help someone with an eating disorder, and a list of resources, visit www.keltyeatingdisorders.ca. Jessie’s Legacy Eating Disorder Prevention Program offers support. Call 1-888-988-5281, or visit www.familyservices.bc.ca.
© Copyright (c) Burnaby Now