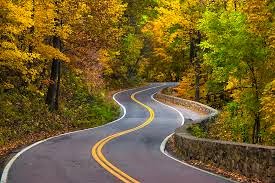 In my last year of high school, “Life is a Highway”, by Tom
Cochran, was a very popular song. When I heard the song on the radio, or (gasp)
on a cassette tape, I would turn up the volume and sing my heart out. Recently,
I heard Rascal Flatts’ cover of this song, and thought that life was definitely
NOT a highway. Perhaps, this is because I’m older and more cynical, or maybe
it’s because I lived with an eating disorder for much of my life. Anorexia and
bulimia were like black ice for me and I nearly careened right over a massive
cliff. While there is little that I can imagine worse than being engulfed by an
eating disorder, my recovery has not been a highway. I wouldn’t give up
recovery for a moment but it hasn’t been easy.
I lived with my eating disorder for almost twenty years
before I sought help. Ok, I admit, I didn’t willingly seek treatment, but I got
there and that’s what is important. It then took me a few years before I
believed that recovery was even possible. I thought this would involve a short
in-patient hospital stay, followed by some outpatient help for a few months,
and then I would be driving down a double lane highway with my hair blowing
elegantly behind me. Some of my misperceptions came from professionals, on-line
resources, recovered individuals and my own unrealistic hopes. Recovery was
more like a muddy, boulder infested, mountain trail that was barely clinging to
a granite ledge. There were switch backs, dead ends, wash outs and tumultuous
weather all along the way. And my hair was an absolute mess.
Full recovery has taken me five years. There are no
guarantees on how long recovery will or won’t take. It takes as long as it
takes. Recovery is possible, but many people do not have access to the
resources and treatment they need. I was blessed that my family and community
provided me with what I needed to recover. I found great support in a community
program that gave me the day to day, and week to week, inspiration to keep
going. I had an amazing counselor who refused to give up on me, even when I gave
up on myself. I attended three different in-patient programs. One was for
almost six months. I felt like a failure at the end of two of those programs
because I relapsed after doing well in them. Trying to find my feet away from
the hospital and treatment environment was very difficult. It felt like leaving
a safe bubble and then not knowing how to manage eating, grocery shopping,
anxiety and everyday stress. Third time was the charm, or so I thought.
When I came home the third time, I was in a constant and
exhausting struggle to avoid slipping back into my destructive eating disorder
patterns. I was fighting twenty years of behaviours and ways of thinking that
didn’t easily disappear. People would ask me when I was returning to work
because I “looked healthy”. I was embarrassed that it was still going to be a
long time before I was in a healthy headspace to return to any kind of job. It
was going to be an even longer time before I didn’t hate my body. Although, I
didn’t know it at the time, I was working harder that I had ever worked in my
life. On that “mountain trail”, I was learning how to drive all over again. I
was stalling, re-starting, reversing, swerving, colliding into rock walls and
getting very, very stuck. I had road rage, at times, over the toll my eating
disorder had taken on my life and how (insert expletives) difficult getting
well was turning out to be. This was not a highway.
Slowly, painfully slowly, my recovery crept forward and it becomes
easier. Not weeks or months, but YEARS. I was creating a new life. I was
rewiring my brain that had been hijacked by anorexia and bulimia. I could not
recover alone. I depended on my outpatient team. My friendships with other
people who were recovering were also vital. I found a support group, and with
great difficulty, reached out for help. I even attended 12 step meetings. I
cried, yelled and felt sorry for myself. I was scared that I would never
recover and scared that I didn’t deserve to recover. I thought that I was
“doing recovery wrong” most of the time. I was really tough on myself because,
how could recovery be this
difficult??! I wish I had shown myself more compassion. I want other people who
are on their own recovery road to be kind to themselves, breathe a lot, keep a
sense of humour and know that they deserve to recover. For those who know
someone trying to recover from these vicious illnesses, empathize with them.
Your support is more important than you can know. My life is still not a
highway, but I am now on a paved road, and I’m looking forward to what might be
behind the next curve.
Janine is from the Lower Mainland and has been in recovery
for several years. She has recently returned to teaching young children and
encourages the development of positive self-image and confidence among her
students. Janine has been part of an advocate group for adults with eating
disorders as well as volunteering with PEDAW. Janine loves to horseback ride
and considers this an important part of her recovery.

One response to “Recovery is not a Highway”